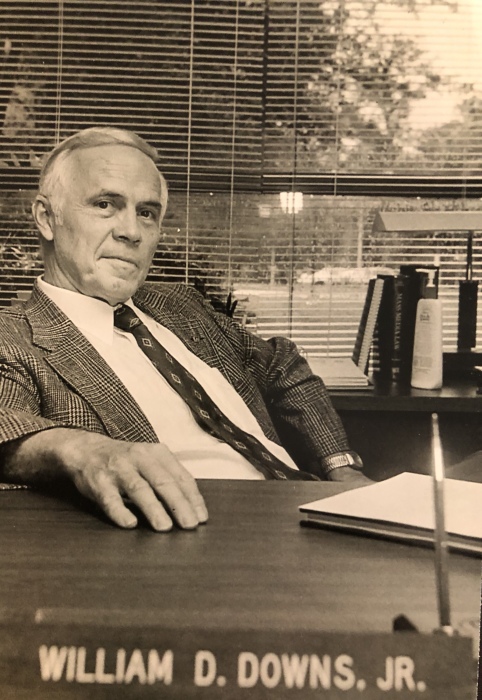 William D. Downs Jr., Ph.D, formerly of Arkadelphia, passed away on April 20, 2019. He was born January 30, 1932, in Calico Rock, Arkansas, to the late William David Downs and Ann Hudson Downs. He was preceded in death by his wife, Jean Estelle Downs in 1989. He is survived by his wife Vera Prince Downs, his sons and their wives, Bill III and Cindy of Bryant, Bob and Kathy of Stafford, VA, and Ben and Sharon of Bryant, and two grandchildren, Emily and Harrison; and by Vera’s daughter and son-in-law Tammy and Steve Lambert, their sons Cash and Chase, daughter-in-law Randi, and their two children Izzi and Lily. Dr. Downs greatly valued family. He was the first grandchild in his mother’s family and throughout his life remained close to his aunts, uncles, and seven cousins, especially Harriett Hudson Phillips of Little Rock, and Caroline Bagby Whitson, and her husband Turner Whitson of Hillsborough, North Carolina.

Downs graduated from Batesville High School in 1949, and then served in the United States Air Force, first as a drill instructor, and then in the USAF Special Services writing, directing, and coordinating entertainment programs for military personnel. After having been honorably discharged from military service, Downs then    enrolled at Little Rock Junior College, and then the University of Arkansas for his undergraduate degree.  He later earned a Master of Arts and Ph.D. from the University of Missouri School of Journalism. He retired from Ouachita Baptist University as professor emeritus of communications in 2007, after serving 41 years at the university.

His early career in public relations included work with the March of Dimes, the Little Rock Chamber of Commerce and Canteen Corporation of America. After completing his master’s degree, it was Ouachita Baptist University where he would spend four decades educating and mentoring young journalists. During his tenure at Ouachita, he served as Director of Public Relations, professor and chair of the Department of Communications, as well as adviser to the Signal newspaper, Ouachitonian yearbook and American Advertising Federation’s National Student Advertising Competition team. As adviser to the Signal and Ouachitonian, the publications won numerous state and national awards including Gold Crowns from the Columbia Scholastic Press Association and All-American Honors from the National Scholastic Press Association.

Downs was known as a tough professor with a kind heart. His mission was to train journalists and those interested in the field of communications.  He had high expectations for his students. He taught his students to “Trust no one, and assume nothing,” and he had his students write, and rewrite, and rewrite, until there was more content than red marks on their papers. Twice, he and his wife, Vera, took students around the world, visiting Time magazine headquarters to learn about global news coverage.

In addition to his service at Ouachita, he was active in other organizations. He served for 25 years as director of the Arkansas High School Press Association. In 1995, during his last year with the organization, he was instrumental in the development and enactment of the Arkansas Student Press Law, which established a framework of freedom of expression for Arkansas high school newspapers.

Downs has served as president of the Arkadelphia Chamber of Commerce, director of the Clark County United Way, a member of the Rotary Club of Arkadelphia, and chairman of the Arkansas Television Network Commission. He was a deacon and Sunday School teacher at First Baptist Church Arkadelphia. He and Vera coordinated the church’s weekly ministry services at two local nursing homes.

Downs is the author of two books. “The Fighting Tigers,” published in 2004, tells the stories of the lives and deaths of the 36 Ouachitonians whose names are engraved on Ouachita’s World War II memorial. “Stories of Survival: Arkansas Farmers During the Great Depression,” published in 2011, is based on interviews of farm families across the state, and recounts how these families, frequently living poverty, survived the hardships of natural disasters and economic collapse with extraordinary faith, resourcefulness, and a sense of humor.

The memorial service will be on Thursday, April 25 at 10:00 a.m. at First Baptist Church, 701 Pine St, Arkadelphia, Arkansas. A reception will be held after the service in the Fellowship Hall. A graveside service for the family will be set at a later date.

Memorials may be made to the William D. Downs Endowed Scholarship at Ouachita Baptist University at obu.edu/development/give/ or 401 Ouachita Street, Arkadelphia, AR 71998.

To order memorial trees or send flowers to the family in memory of William Downs Jr., please visit our flower store.