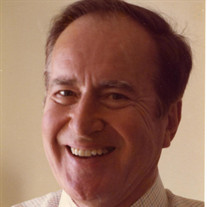 Dr. Wayne Slife, 96, died early in the morning on January 10th, 2018 after a short illness. Wayne had been in declining health for several years and wasn't able to fend off a case of influenza.

Wayne was born on August 30th, 1921 in Pittsburgh, Pennsylvania, the first child of L. Wayne "Doc" Slife and Laura (Holtz) Slife. His family relocated to their native Chicago early in Wayne's childhood where he and his sister, Marilyn, grew up during the Great Depression. Wayne enlisted in the Army Air Corps on December 8th, 1941 in the immediate aftermath of the Japanese attack on Pearl Harbor and he entered pilot training in early 1942.

Wayne volunteered repeatedly for overseas duty, but spent much of World War 2 stationed at Marfa Army Airfield in west Texas where he served as an instructor pilot, training new students to fly. Finally, near the end of the war, he secured his release for overseas assignment as a P-38 fighter pilot. He received advanced training and was on his way to San Francisco to ship out for duty in the Pacific as part of the planned invasion of Japan when the war ended in August 1945. He separated from the Army shortly afterward.

At about this same time, Wayne married Maximo "Max" Dodson and they had two children together: Sara and Phil. Throughout the 1950s, Wayne served as a sales representative throughout Texas, selling large generating engines to municipal power plants. During this time, he pursued a doctorate of philosophy degree from the University of Houston in the field of psychology. He used this advanced education to begin work as a business consultant and manufacturing executive. Wayne relocated to Detroit and he and Max divorced.

During the 1960s, Wayne worked in a number of large companies, culminating in a job as the president of Massey-Ferguson Tractor Company. Wayne married Michele (Dubrule) Browning while living near Detroit where they had Jim, the first of their two children together. As the decade came to a close, Wayne left industry to pursue a third career, this time in academia.

Around 1970, Wayne and Michele moved to Arkadelphia where they had their second child, Andrew. Wayne established the Psychology Department at Henderson State University. Throughout the 1970s and 1980s, Wayne led the department and produced hundreds of graduates in the field. In 1984, Wayne and Michele divorced. Wayne married for the third and final time, this time to Emily Gaughan, with whom he had his fifth child, Matthew.

When Wayne retired from Henderson State University, he and Emily briefly owned and operated a medical supply business before Wayne retired for good. After he and Emily divorced, Wayne spent the last 25 years or so of his life in a restful, if not stationary, retirement near his various children. Wayne lived in Navarre, Florida, Colorado Springs, Colorado, Fayetteville, Arkansas, Burke, Virginia, Clovis, New Mexico, Ft Walton Beach, Florida, and Tampa, Florida before finally returning to Arkadelphia in 2015 to live out his final years near his youngest son, Matthew.

Wayne is survived by all 5 of his children as well as 12 grandchildren and 3 great-grandchildren. His final resting place will be at Boulder Cemetery in Central City, Iowa in a peaceful family plot.
To order memorial trees or send flowers to the family in memory of Wayne Slife, please visit our flower store.
Send a Sympathy Card