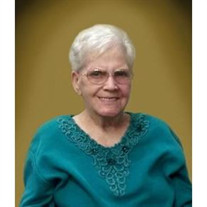 Wanda Lee Kizziar Thompson, 84, left her Earthly home in Hot Springs on March 17, 2016 and is now picking berries with Ma, Aunt Martha, and Aunt Virgie in Heaven's Berry Patch.. Wanda was born on April 29, 1931 in Friendship, Arkansas to Lee Abner and Agnes Pennington Kizziar. She was married to Lelon Ross Thompson until his death in 1996. She is also preceded in death by her parents and brothers, J.W., Marvin, Odie, Larry, and Elvin Kizziar. She is survived by her son, Shane (JuneMarie) Thompson of Hot Springs, her brothers, Lindell Kizziar of Jefferson, Texas, and Johnny (Linda) Kizziar of Texarkana, her sisters Bonnie Adams of Malvern, Cookie Cannon of Malvern, and Margaret (Alvin) Starkey of Donaldson, and three grandchildren, Peter, Bekah, and Tabitha.

Wanda worked for many years at the Levi Strauss factory in Arkadelphia, then at Mary Chamber's Ceramic Shop, and finally at Henderson State University as a Custodian. She was always active, working hard, until time caught up with her body. She was a member of Mt. Bethel Baptist Church in Arkadelphia for many decades.

Visitation will be at the Ruggles - Wilcox Funeral Home on Monday March 21 from 6 to 8 pm. A graveside service will be held at Gilchrist Cemetery in Friendship at 2:00 pm on March 22 with Rev. Roger Reid officiating.

The family would like to thank Hospice of Central Arkansas for all of their support, advice and care for Mom during her last days.

In lieu of flowers, the family would like donations to be made to the Clark County Humane Society.
To order memorial trees or send flowers to the family in memory of Wanda Thompson, please visit our flower store.
Send a Sympathy Card