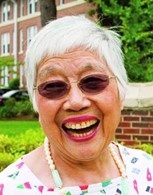 A memorial service will be held at 10 AM Thursday, January 6, 2022 at First Baptist Church of Arkadelphia, Arkansas, with the Reverend Dr. Blake McKinney officiating. Visitation will be at Ruggles-Wilcox Funeral Home from 6-8 PM on Wednesday, January 5.

Born as Shufang Yang on April 7, 1928 in Qingdao, China, Rosemary was the fourth-of-five children for Guan En and Ai Zhen Yang. She grew up in St. Paul’s Lutheran Church of Qingdao, where her father was the first Chinese ordained Lutheran pastor in China. In addition to the Sunday church worship services, the Lutheran missionaries in her father’s church taught weekly English classes, where they gave Shufang the English name of “Rosemary.” When Rosemary was a teenager, the Chinese Revolution of 1949 emerged, and her parents decided to quietly slip Rosemary out of China by herself, to her freedom. She boarded a train traveling eight days to Hong Kong, carrying no suitcases, but wearing eight pairs of underwear, one over the other, hiding her traveling money in her underwear. She bid goodbye to her parents, and due to communication cutoff, never saw them again. After first immigrating to Hong Kong, she then moved to the United States to attend college, where she graduated from Wittenberg University in Springfield, Ohio.

In 1955, Rosemary met and married Finley Chu in Chicago. They moved to Shawnee, Oklahoma, where Dr. Chu was an economics professor at Oklahoma Baptist University and later at Ouachita Baptist University in Arkadelphia, Arkansas until he became ill. Following his death in 1967, Rosemary and their daughter Jane moved into the Frances Crawford Dormitory on the Ouachita campus, where Rosemary worked as a Resident Hall Director. She was a Dorm Mom for tens of thousands of university students over the next 42 years.

Upon her retirement from Ouachita in 2009, the university named a new campus dormitory – “Mom Chu” Dormitory – in her honor. She moved to Lee’s Summit, Missouri, where she was active in the First Baptist Church of Lee’s Summit.

Rosemary was preceded in death by her husband, Finley M. Chu, as well as her parents and three siblings in China. She is survived by her daughter, Jane Chu of Washington, DC.

To order memorial trees or send flowers to the family in memory of Rosemary Chu, please visit our flower store.