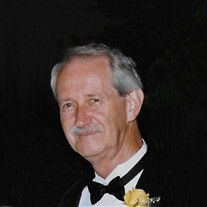 Richard "Dick" Allen Bartlow
Dick is the son of Grace Dierdorf and Paul Munier. He was born July 28, 1937 and was a resident of Indianapolis. He was married to Norma Jean Halliburton, the love of his life. They have three children, Deborah Tackett (John), Mark Bartlow (Julia) and, preceding him in death, Pamela Hoover (John). Dick and Jean's grandchildren are Adrienne Shuffield (Ryan) parents of Braden, Laura Manuel (Schuyler) parents of Hazel, Elizabeth Smith (Justin) foster parents of three, Eric Bartlow and Alex Bartlow. He has a special sister in-law Linda Halliburton and special nephew Jeff McCoy (Kim) parents of Amanda and Natasha Moore (Don). He had a very special bond with his Dierdorf, Paulus and Schepper families who were like brothers and sisters to him.

At age 62 Dick retired from Rolls-Royce as a Plant Layout Engineer. He was a graduate of Ben Davis High School, attended Rose Poly Technical Institute and a graduate of Indiana University Purdue University Indianapolis (heavy on the Purdue side). Dick was a veteran of the United States Army. He was an honorary member of the Joan Hunt Club. Some of his passions were fishing, hunting, gardening, travelling, food, photography, writing and scrapbooking, but most importantly spending time with his family and friends.

Dick was selfless and a wonderful provider. He embraced every moment by living life fully. Through his Christian actions he was a moral compass to everyone he encountered.
Dick passed away from a long term illness on February 17, 2017 at age 79 at Twin Rivers Health and Rehabilitation in Arkadelphia, Arkansas. He was enveloped with love from the staff and fellow residents there.

Visitation in Arkansas will be Monday, February 20th at Ruggles-Wilcox Funeral Home, Arkadelphia from 4:00 to 6:00 p.m. Visitation in Indiana will be Wednesday, February 22 at Flanner and Buchanan Mortuary in Speedway, Indiana from 1:00 to 3:00 p.m. with funeral service immediately following. Burial will be at West Ridge Park with military honors.
Memorial contributions may be made in memory of daughter Pam Hoover to any Epilepsy Foundation.

To order memorial trees or send flowers to the family in memory of Richard Bartlow, please visit our flower store.