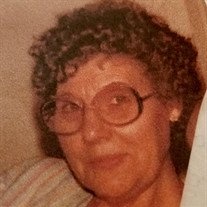 Reba Jean White, 91, died Tuesday evening, August 21, in Las Vegas, Nevada. She had been in hospice care after suffering multiple strokes a few months ago. She was born April 18, 1927, near Donaldson and had lived in the Trinity Community near Okolona and Arkadelphia since 1946.

She is survived by her son, Fred White, of Las Vegas; her daughter, Gloria White (David Gogol), of Washington, DC, her grandchildren, Catherine Gogol and Nikolas Gogol, both of Washington, DC, her brother, Gleason F. McGuire, of Alexander, Arkansas, and many nieces and nephews. She was preceded in death by her husband of more than 50 years Truman F. White, her parents Dave McGuire and Marie Whiteley McGuire and her siblings Floy McGuire Strother, Harrison McGuire, Clayton McGuire, Agee McGuire Hall and Horace McGuire. Reba Jean's twin, Royce Glen, and Horace's twin, Doris Marie, both died in infancy.

Until her move to Las Vegas a few years ago, necessitated by declining health, she had lived her entire life in the area of Okolona, Arkadelphia and Malvern. She was an active member of Trinity United Methodist Church near Okolona for almost 60 years, becoming a member in 1949. She served as a Trustee of Trinity and worked with fellow members of the church to rebuild after the building was destroyed by a tornado a number of years ago. Prior to her retirement she worked at Henderson State University in the Student Union from the 1960's until about 1980. She was a gifted seamstress making everything from doll clothes and Halloween costumes to wedding dresses and men's business suits. She was a devoted wife, mother, grandmother, sister and loyal friend. Always a caretaker, she was willing and eager to help friends and neighbors whenever needed.

If you would like to make a donation in her memory, please consider a contribution to Trinity United Methodist Church, c/o Pat Gaylord, 7719 Highway 51 South, Okolona, AR 71962.

To order memorial trees or send flowers to the family in memory of Reba White, please visit our flower store.