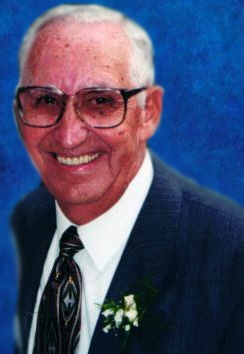 Ray H. Wilcox, age 96 of Arkadelphia, formerly of Paragould, AR, died Sunday, September 6, 2020.  He was born on a small farm in the Alexander Community near Paragould December 23, 1923, the son of James Edgar and Mary Frances Jones Wilcox. He was a retired farmer and during winter months a talented cabinet maker and carpenter.  He was a member of Alexander Baptist Church where he served as a deacon and church treasurer for many years.  After moving to Arkadelphia to be near his son and daughter-in-law, he attended and enjoyed the church family at Mt. Zion Baptist Church in Arkadelphia. Ray was an U. S. Army veteran of World War II.

Ray grew up in hard times and learned very early that honesty, integrity, and a good work ethic were far more important than the material things life had to offer.  His generation believed a handshake and your word were as good as any contract.  He was a quiet man that enjoyed simple things in life, hunting, fishing, dominoes, fish fries with family and friends and just being outside were things that made him happy. His kind heart and sense of humor made all that knew him love him. We will miss him greatly. He was preceded in death by his wife of 72 years, who died July 24th of this year, Wava Jean McMillon Wilcox, and two brothers, Jim and Warren.

Survivors include one son, Mike Wilcox and his wife Rebecca of Arkadelphia; one granddaughter, Lynli Carlin of Little Rock; two great grandsons Oliver and Julian Carlin; sister-in-law Sammy Kay Burton of Paragould; three step grandchildren,  Michael Lawson, Michelle Brock and Megan Evans; a host of nieces and nephews and too many friends to count.

The family thanks the staff at The Plaza for their loving care for Ray.

Due to Covid-19 restrictions, there is no formal visitation and burial will be private.

To order memorial trees or send flowers to the family in memory of Ray Wilcox, please visit our flower store.