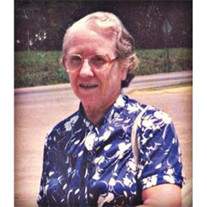 Rachel Marie Carr age 92 of Alpine died Friday, October 16, 2015. She was born December 25, 1922 in Clark County the daughter of Will and Carrie Thomason Loyd. She was of Baptist faith. She was preceded in death by her husband, Guy Cecil Carr, one son Bobby Carr, one daughter, Carolyn Burrow and a grandson, Damon Burrow.

Funeral services will be 11 AM Monday, October 19th in the Alpine Cemetery building with Rev. Johnny McAnally officiating. Burial will be in the Alpine Cemetery under the direction of Ruggles-Wilcox Funeral Home. Visitation will be 10 AM till service at the same building.
To order memorial trees or send flowers to the family in memory of Rachel Carr, please visit our flower store.