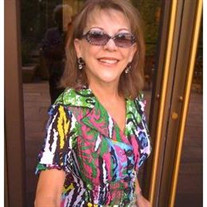 Phillis Jeffrey, daughter of Annie Laurie Hardin Klein and Robert Lee Hopkins, was born in Memphis, Tennessee, and grew up in Arkansas and Texas. Phillis passed away on Monday, September 14, 2015. She graduated from Lamar University in Beaumont, Texas, and earned a Ph.D in Communication and Performance at the University of Texas, Austin in 1976.


She served on the faculties of the University of Texas at Austin, Auburn University, and the University of Vermont, where she taught Literature in Performance. She was the co-author of Group Performance of Literature in which her critically praised script, No Sense of Decency: The Army-McCarthy Hearings, appeared. She contributed to several National Communication Association publications. Her dissertation, "An Expressive Voice: The Poetry of Diane Wakoski" is available online.


Ongoing passions defined Phillis's work. A lifelong Democrat, she was a fierce advocate for abused women through Family Violence and Rape Crisis Centers. She counseled battered women and often appeared with them in court. She supported LGBT men and women and other groups whenever she saw justice at stake. She founded the Jeffrey Communication Group, which provided assistance to political candidates. Later, while living in San Miguel, Mexico, temporarily, she joined an effort to heighten awareness of historical and cultural landmarks. A fluent speaker of Spanish, she became a walking tour leader for that city's residents and tourists.


Phillis Jeffrey was an ebullient woman. Smart, stylish, and beautiful, she listened intently, laughed freely and often, voiced strong opinions, and shared in the lives and times of colleagues and friends across the country. Moreover, Phillis was determined and positive when facing the ravages of cancers and, finally, respiratory failure.


Especially significant in Phillis' life were Steve Rienstra and Robert Jeffrey, her late husbands; and Gilbert Tausch of Houston, Texas, her beloved partner during the last six years of her life.


Phillis's ashes will be buried in Okolona, Arkansas, near her mother's grave. At this same place in the spring, a celebration of Phillis's life will take place.


Friends may consider a memorial contribution to an organization that provides assistance and support to abused, disadvantaged or discriminated against persons.
To order memorial trees or send flowers to the family in memory of Phillis Jeffrey, please visit our flower store.
Send a Sympathy Card