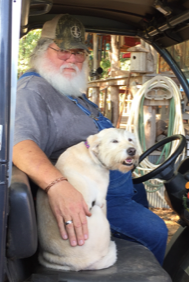 Percy “Henry” Nalls, Jr. of Sparkman passed from this life on September 3, 2019. He was born November 25, 1953 to the late Percy & Lucille Nalls at their family home in Sprakman.

Henry was a retired heavy equipment operator, truck driver, and served as Mayor of Sparkman for 12 years. He was a beloved Santa to many both young and old. He was an active member of United Methodist Church of Sparkman.

Memorials can be made to United Methodist Church of Sparkman, 1564 Hwy 128 Sparkman, AR. 71763 ; or the local Humane Society of your choice.

Visitation will be Thursday September 5, 2019 from 6:00 – 8:00 p.m. at Ruggles Wilcox Funeral Home. Funeral Service will be Friday September 6, 2019 at 10:00 a.m. at the United Methodist Church of Sparkman with Peggy Abbott and Max Deaton officiating. Interment will follow the service at the Sardis Cemetery.

To order memorial trees or send flowers to the family in memory of Percy "Henry" Nalls, JR., please visit our flower store.