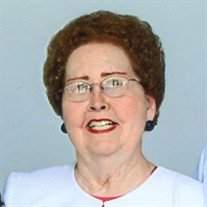 On September 7, 2018, after a valiant 26-year battle with cancer, Peggy Sue (Wood) Koen has won and is celebrating in heaven.
Our sweet Peggy was born August 16, 1934, in the farming community of Richwoods, AR. Her parents, Henry Wood and Annie Mae (Hollingshead) Wood, raised her in Gurdon, AR, where she was a member of Beech Street Baptist Church and the Gurdon High School Class of 1952. It was in Gurdon where she fell head over heels for the handsome Carl Koen Jr., who became her husband in 1956.
Peggy graduated with a BS from Ouachita Baptist College in the spring of 1956, and after their marriage that summer, the two headed to Mountain View, CA, where Carl was stationed in his service in the Navy.
Peggy taught school in California, and later in Waco and Houston, TX. The two moved to Pine Bluff, AR, in 1965 with their young son, Roger. Daughter Carla was born in 1967.
Peggy had many loves, from playing piano, singing and reading to laughing over things that others might miss. She and Carl shared a love for adventure, and traveled to six continents together. Her life and her heart were full.
Peggy was preceded in death by her brother, Roger, and her parents. Her survivors include her beloved husband, Dr. Carl Koen, children, Roger Koen of Dallas and Carla Koen (and husband Reade Mitchell) of Little Rock, and brother Henry Ward Wood Jr. (Melba) of Texarkana, TX. She also leaves behind her extended family, many longtime friends, the ladies of the 20th Century Club, and her church family at First Baptist of Pine Bluff.
Special thank yous go to Dr. Laura Hutchins and Dr. Richard Nicholas of UAMS, who worked to give her so many bonus years of life.
In lieu of flowers, she requested - no, insisted - that contributions be made to First Baptist Church, 6501 S. Hazel St., Pine Bluff AR, 71603, or to your favorite nonprofit.
A graveside service will be held 10:00 a.m. Monday, September 10, 2018 at Rose Hedge Cemetery in Gurdon. Visitation will be 2:30 to 3:00 p.m. Monday, September 10, 2018 at First Baptist Church of Pine Bluff, followed by a Memorial Service. Online guestbook at www.ruggleswilcox.com .

To order memorial trees or send flowers to the family in memory of Peggy Koen, please visit our flower store.