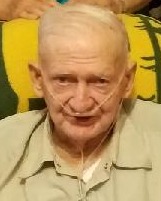 Ottis Jester age 90, of Curtis, passed away Sunday, September 4, 2022 in Arkadelphia. He was born March 13, 1932 in Curtis to the late Riley and Ludie Smith Jester. Ottis was a very good baseball player during his school years. Ottis worked at Southern Farmer’s Association in Arkadelphia. He was a logger and drove a school bus for the Arkadelphia School System. He and his late wife, Lynn were very involved in the foster care program and was recognized by the governor of Arkansas for fostering hundreds of children.

A Memorial Service will be held at 3:00 p.m. on Friday, September 9, 2022 at the Ruggles-Wilcox Funeral Home Chapel.

To order memorial trees or send flowers to the family in memory of Ottis Jester, please visit our flower store.
Send a Sympathy Card