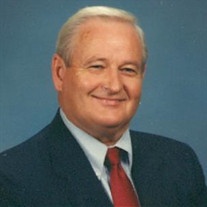 Millard E. Aud, age 83, of Arkadelphia, passed away Monday, November 20, 2017 at Baptist Healthcare in Little Rock. He was born February 1, 1934 in Arkadelphia to the late Earl and Desser Brown Aud. He was a member of First Baptist Church and a past deacon at Second Baptist Church. Millard was an U. S. Army veteran of the Korean Conflict.

Millard was the chairman, trustee and general manager of the Olds Foundation in Amity, AR. He previously was president of the Bank of Amity, the Atlanta National Bank in Atlanta, Texas, and the Merchants & Planters Bank in Arkadelphia. He was a member of Arkadelphia Masonic Lodge #381 and Scimitar Shrine Temple.

Millard was very proud of his community, serving in many different capacities. He currently was on the board of the Caddo Career Consortium, South West Arkansas Planning and Development Corp, advisory board of Baptist Health Medical Center in Arkadelphia and the Board of Trustees for Ouachita Baptist University.

Services will be at 2:00 PM Saturday, November 25th at Arkadelphia First Baptist Church with Dr. Jimmy Darby and Bro. Charlie Williams officiating. Burial will follow at Rest Haven Memorial Gardens. Visitation will be 12:30 PM Saturday until service at the church.

To order memorial trees or send flowers to the family in memory of Millard Aud, please visit our flower store.
Send a Sympathy Card