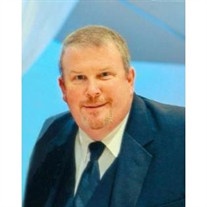 Michael Harvey age 55 of Hot Springs, AR died February 10, 2017. &#160;He was born October 1, 1961 in Kokomo, IN, the son of Richard G. and Martha Jayne Lee Harvey. &#160;He was a salesman for Core Mark and a member of Harmony Primitive Baptist Church.
He is survived by his wife Barbara Harvey; one son Marcus Conrad Harvey; one daughter Aubree Nicole Mckin; one brother Gary Harvey; one sister Mardi Bonner; and two Grand Dogs, Ellie (aka Shorty) and Titan (aka Wiggle). He was preceded in death by one brother Scott Harvey.
Funeral services will be 10:00 a.m. Tuesday in the Ruggles - Wilcox Funeral Home Chapel with Sonny Phelan officiating, and burial in Macedonia Cemetery at Dalark. Visitation will be from 9:00 a.m. until service time at the funeral home. Memorials may be made to Harmony Primitive Baptist Church, Leon Burris, 6045 Hwy 51, Donaldson, AR 71941.
To order memorial trees or send flowers to the family in memory of Michael Harvey, please visit our flower store.