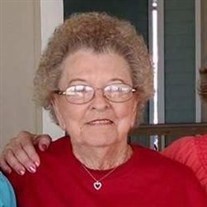 Mel was very active with the Lighthouse Ministries at Red River Baptist Association, where she served as a volunteer for many years. She was a member of Park Hill Baptist Church, serving as the church organist and as a choir member. For many years, she was involved with church nursery.

She was preceded in death by her husband, Steve Garner; a daughter, Betty Reding; a great-grandchild, Billy Glenn Cook; two sisters, Margaret Pittman and Polly Taylor; and one brother, Jesse Bell Jr.

Visitation will be 9:00 a.m. Wednesday until service time at Park Hill Baptist Church.

Memorials may be made to Lighthouse Ministries at Red River Baptist Association, P.O. Box 396, Arkadelphia, AR. 71923.
To order memorial trees or send flowers to the family in memory of Mel Garner, please visit our flower store.