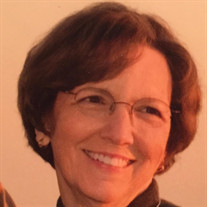 Martha Marie Barber White died February 23, 2017, at Twin Rivers Health & Rehabilitation Center in Arkadelphia, AR. Her 12 year battle with Alzheimer's Disease is over and she looks forward to an eternity in Heaven with her Lord & Savior Jesus Christ. Martha was born in Atlanta, GA, June 12, 1938 to Ernest J. and Sally Anchors Barber. Martha grew up in Dallas, TX and attended First Baptist Church where she was saved. She was baptized by her pastor W. A. Criswell. She was an accomplished pianist and had several recitals as a child that required playing classical music. She attended Baylor University where she met her husband, Don White. She received her B.A. in Elementary Education from Baylor and her Master's Degree from Henderson State University. After marriage, Martha and Don moved to Sparkman where she taught elementary school for 25 years. She loved teaching, loved her students and her students loved her. Her husband, Don, expresses what a wonderful wife and partner she has been to him. She was adored by her children and grandchildren. She was preceded in death by her parents of St. Petersburg, FL; and her father and mother-in-law, Ray and Alverda Fore White.

Services will be held at First Baptist Church in Sparkman, AR at 2:30 p.m. Saturday, February 25, 2017, with Bro. Jimmy Burks and Bro. James Guthrie officiating. Burial will follow in the Sparkman Cemetery. Visitation is Friday, February 24, 2017, at the Ruggles-Wilcox Funeral Home in Arkadelphia, AR from 5:00-7:00 p.m. Memorials may be made to the First Baptist Church, Attn: Bill Sorrels, 213 So. Broadway Ave., Sparkman, AR 71763 or the charity of your choice.

To order memorial trees or send flowers to the family in memory of Martha White, please visit our flower store.
Send a Sympathy Card