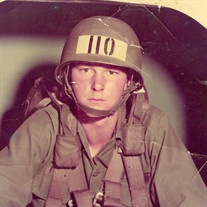 Mark Eugene Travis Sr. age 62, of the New DeRoche Community near Donaldson, passed away Sunday, May 7, 2017 in St. Vincent's Arkansas Hospice in Hot Springs. He was born January 17, 1955 to Wiley and Carrie Carroll Travis. Mark was a construction worker and a U. S. Army veteran serving in the 82nd Airborne Division from 1972 until 1982.

He was preceded in death by his parents, a brother, Solomon Odell Travis; sister-in-law, Belinda Sue Andry; mother and father-in-law, John and Judy Todd.

Graveside services with military honors will be at 10:00 AM Wednesday, May 10th at Fairplay Cemetery (Saline County Arkansas).

The family would like to extend their appreciation to Arkansas Hospice of Hot Springs, Area Agency on Aging in Hot Spring County, Pat Hughes and his granddaughter, Brooke Travis.