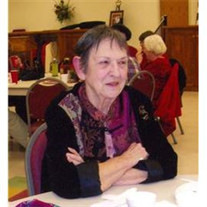 Marjorie Posey Thornton, age 86, of Donaldson, passed away Wednesday, October 12, 2016 at Malvern. She was born October 3, 1930 in Brown Springs, Arkansas to the late James Anderson and Josie Cupit Posey. Marjorie worked with Southwestern Bell and later at Wal-Mart. She was a Primitive Baptist.

She was preceded in death by her husband, Joe Paul Thornton and her daughter, Paula Lynn Thornton.