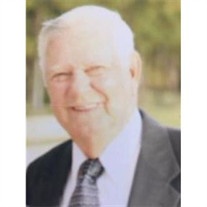 Lloyd "Skeeter" Carter of Arkadelphia went home to the lord at the age of 83, on Thursday August 4, 2016. He is survived by his wife of 60 years, Barbara Brown Carter, three children, Windy Carter and husband James Hawthorne, Lisa Carter, Lonnie Carter and wife, Patti, four grandchildren, Mindy Carter Brant and husband Tim, Jenna Carter Schexnayder and husband Jason, Neily Wheeler Dean and husband Cameron, and Blaire Wheeler, five great grandchildren, Gracie and Evan Brant, Carter and Samantha Schexnayder, and Charlie Dean. He is also survived by brother in law Richard "Dickey" Brown and wife Sandy, and sister in law, Donna Brown Steed and husband Doug. Numerous beloved nieces and nephews.
Preceded in death by his son Steven Brown Carter, his parents William Oscar and Thelma Carter and his sister Sue Carter Wade.
Skeeter grew up in the Okolona area until graduating from Okolona High school and then attended Henderson State University.
He served in the Army during the Korean War. Retired from Security Industrial Insurance in 1998 after 30 years with the company, and then moved back to Arkadelphia to enjoy retirement playing golf with his old buddies and spending time with his family.
The Carter family would like to thank Arkadelphia Medical Clinic, St. Vincent Hospital, and Twin Rivers staff for all their loving care during his brief struggle with cancer.
Visitation will be Sunday, August 7, 2016, from 5:00 to 7:00 p.m. and Monday, August 8, 9 AM till service time at Ruggles-Wilcox Funeral Home, Arkadelphia. Graveside service will be held Monday, August 8, 2016 at 10:00 a.m. at Rest Haven Memorial Gardens on Highway 8.
In lieu of flowers, memorials may be made to the charities of your choice. Sign on line guest book at www.ruggleswilcox.com .
To order memorial trees or send flowers to the family in memory of Lloyd Carter, please visit our flower store.