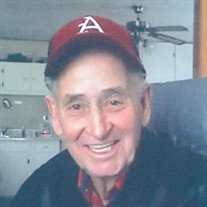 Keylon Jackson died October 1, 2018. He was born to Carl D. Jackson and Susan Watson Jackson in 1924 in Hollywood, Arkansas.
He was preceded in death by his parents, his wife of sixty-one years, Grace Sossamon Jackson; sister, Nadine; and son, Kevin Jackson of Omaha, Nebraska.
Keylon is survived by his daughter in law, Tami Jackson of Omaha, Nebraska; three grandchildren, Brent, Claire and Sarah Jackson all of Omaha, Nebraska; and sister in law, Betty Smith of Sparkman, Arkansas.
He served his country for three years in the South Pacific Islands. He graduated high school in Arkadelphia in 1942 and Henderson State University in 1950.
Keylon worked for Amoco/BP Oil Company for thirty-five years in regional office in Atlanta, Georgia; and retired as manager of operations in Memphis, Tennessee, in 1984.
He is a member of First Methodist Church in Arkadelphia. He is also a 32nd Degree Mason of the Scottish Rite.
In lieu of flowers, memorials may be made to Hollywood Cemetery Trust Fund, care of Southern Bank Corp., P.O. Box 248, Arkadelphia, Arkansas 71928.
A visitation will be held 10:00 A.M. Friday, October 5, 2018 followed by a Memorial Service at 11:00 A.M. at Ruggles-Wilcox Funeral Home. Final arrangements entrusted to Ruggles-Wilcox Funeral Home for entombment in Rest Havens Memorial Gardens.

To order memorial trees or send flowers to the family in memory of Keylon Jackson, please visit our flower store.