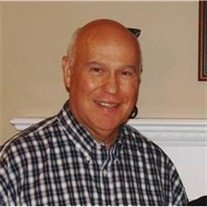 Kenneth G. Miles Jr, age 75, of Arkadelphia, passed away due to renal cancer on November 25, 2016, at his home. He was a member of First Baptist Church.

Ken was born on August 28, 1941, to Kenneth and Rea Marceil (Clay) Miles of Enid, OK. He graduated from Enid High School in 1959 and Oklahoma Baptist University in 1963. He also attended Southwestern Baptist Theological Seminary for two years. Ken dedicated his life in service to the Lord as a Minister of Music, Youth and Education in Oklahoma, Texas and Arkansas. He was also a Residence Hall Director and Assistant to the Dean of Students at Ouachita Baptist University from 1985 to 2009.

Ken was a caring father and husband who filled our lives with laughter, love and music. He was an avid NFL football fan--his favorite team being the Dallas Cowboys. Ken was admired for the way he ministered to the lives of many youth, college students, and adults during his many years of church and student ministry. He received the Arkansas State Humanitarian Award in 1979 for his work directing a handbell choir for adults with disabilities.

He is survived by his wife of 26 years, Betsy Miles and their son, Johnathan; daughters Shelli (Troy) Conrad of Farmington, AR, SuLyn (Darryl) Wine of Warrior, AL, and Kayla (Jeff) Abernathy of Bentonville, AR; sisters Jan Sears of Cordell, OK, Rea (Phil) Pounds of Pflugerville, TX, and Darla (Mark) Sears of Pocola, OK; ten grandchildren, and several nieces and nephews. He is preceded in death by his parents, sister Carolyn Zuniga, and brother David Miles.

Visitation will be from 3:00 to 5:00 pm on Sunday, November 27, 2016, at the Fellowship Hall in First Baptist Church of Arkadelphia. Funeral Services will be at 10:00 am Monday, November 28, 2016, in the Sanctuary.
To order memorial trees or send flowers to the family in memory of Kenneth Miles Jr, please visit our flower store.