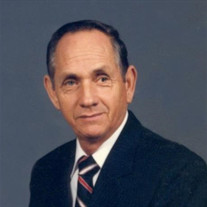 BISMARCK a�" Kenneth Edwin Jackson, 85, of Bismarck, died Friday, October 20, 2017 at his home. He was born August 24, 1932 in Old Washington, AR to the late Joseph and Annie Lou Jackson. He was a graduate of Arkadelphia High School and was a retired employee of Arkansas State Parks. In his retirement, Kenny was a master electrician and was known to his family as the "Uncle Kenny who could do and fix ANYTHING!" He was a member of Woodmen Life and Unity Missionary Baptist Church in Bismarck. He was an avid hunter and outdoorsman.

Kenny was preceded in death by his parents and a brother, Joe Jackson. He is survived by his loving wife of 59 yrs., Bess Yates Jackson; his brother and sister-in-law. Stingley and Becky Jackson of Mayflower, AR. and their four children; and, a host of in-laws, nephews and nieces. Having no children of their own, Kenny and Bess were very influential in the lives of their nieces and nephews, especially caring for and loving as their own, Bryan (Shannon)Thomasson of Alma, AR and Grace Ann Thomasson (Kevin) Nordin of Bryant, AR, after the death of their parents.

Visitation will be at 1 p.m., October 24, 2017 prior to the 2 p.m. Memorial Service at Ruggles-Wilcox Funeral Home in Arkadelphia, AR. Burial will be in Deroche Cemetery in Bismarck, AR.

The family would like to thank members of Arkansas Hospice who ministered to both Kenny and Bess; family, friends and neighbors in Deroche and Unity Missionary Baptist Churches; and, neighbors who were always there when called upon.

To order memorial trees or send flowers to the family in memory of Kenneth Jackson, please visit our flower store.