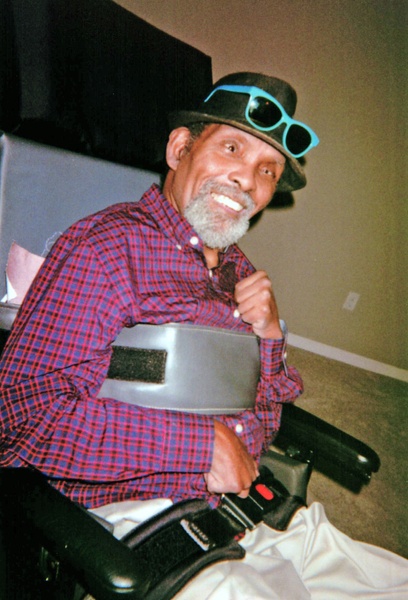 Joe was born April 5, 1952, in Nashville, Arkansas to Joe Scoggins, Sr. and Esther Gallington Scoggins at Nashville Memorial Hospital. Joe was a pre-mature baby, so he required an extended stay in the hospital.  His mother died at birth.

Joe was adopted and given loving care by his aunt, Zelma Scoggins Rogers and uncle Robbie Rogers.  He grew up with their children: Pearl Lene, Pearl Lee (Booster) Cleter Bell and Mary Lee in Center point, Arkansas.

Joe Jr was a quadriplegic all of his life.  He left his home with Zelma and Robbie at the age of 17.  Conway Human Development Center (CHDC) became his home for 36 years where he learned and made excellent progress with help from the CHDC staff.  Joe worked as a mail carrier. Joe was a social being who loved to talk and laugh, so mail moved slow sometimes.

In 2005 Joe moved to Arkadelphia HDC where he continued his journey with some adjustments.

Joe Jr. made many, many friends in his life here on this earth. He liked to sing. The songs on the program, at the funeral service, are two of his favorites. Can you imagine him in the heavenly choir!!!

Per family, temperatures will be taken and masks are required.

Click to download / open
To order memorial trees or send flowers to the family in memory of Joe Scoggins, Jr., please visit our flower store.
Send a Sympathy Card