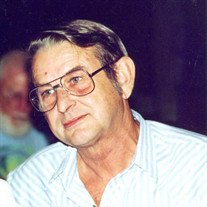 Jimmie "Jim" Caver, Age 84, of Arkadelphia, passed away peacefully Monday, August 6,2018, at St. Vincent Hospital in Little Rock after a very sudden illness. Jim was born in Amity but was a lifelong resident and business owner in Arkadelphia. He was born March 21, 1934, the son of the late W.C. "Bill" Caver and Alma Jackson Caver.
Jim was preceded in death by the love of his life Joyce Palla, in October of 2015. He is survived by his sister Jean Caver Wheeler and his children; Ginny Caver Brown, Melody Caver Almond and her husband Scott Almond, John Caver and his wife Stacy Taylor Caver, and Paul Caver. Jim is also survived by his step-children Rodney Allen, Becky Norman, and Rand Allen, and his niece and nephew Tammy Wheeler Burr and Lance Wheeler. Jim is also survived by eleven grandchildren and four great-grandchildren.
Visitation will be from 5-7pm Wednesday, August 8, 2018 at Ruggles Wilcox Funeral Home in Arkadelphia. Jim will be laid to rest at a private family graveside service. Sign Jim's online tribute wall at www.ruggleswilcox.com .
To order memorial trees or send flowers to the family in memory of Jim Caver, please visit our flower store.
Send a Sympathy Card