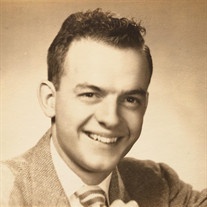 Jerry Clayton Clark, age 87, a fine man of reason and faith, passed away April 17 after battling Parkinson's disease for several years. A wonderful husband, father, and grandfather, well loved by so many relatives and friends, Jerry is survived by his wife of 63 years, Jo Ann Zeigler Clark and children Ted (Christina) and Ruth (Loraine), and grandchildren Jonathan Thomas (Tiffany) and Marlena Clark. He is also survived by his big brother Jim Clark (the late Dorothy), his dear sister Mary Beth Stage (Bob), and baby sister Esther Crawford. He was uncle to 6 nieces and nephews, plus a beloved close relative to Jo Ann's cousin Mary Alice Gibner and her children and grandchildren.

Jerry was born October 30, 1929, the day after the great stock market crash, in Hope, Arkansas. Having grown up in Clark County, he moved with his family to North Little Rock and later graduated from NLR High School. He earned a degree in Chemical Engineering from Georgia Tech. A lifelong Methodist, Jerry was studying at Scarritt College in Nashville, Tenn. planning to become a lay missionary to Chile when he met his future wife Jo Ann, who was in Nashville getting a Master's degree at Peabody College. They became engaged 10 days after they met and married 6 weeks later. Shortly after their wedding, he was drafted into the Army and they were deployed to Red Bank, NJ and then to Bordeaux, France. After his discharge they moved to Texas City, Tex. where they began their family. In the 1960's, he received an MBA from the University of Houston and worked in the newly developing field of data processing. Over the years they lived in Memphis, Tenn.; suburban Chicago; and then Houston starting in the 1970's. They developed deep friendships with members of the Probers Class at Memorial Drive United Methodist Church.

His career included a progression of MIS / IT management positions at chemical, petroleum, and gas pipeline companies, plus a large Houston law firm. Jerry and Jo Ann loved to travel and made trips to England, Scotland, France, Italy, Egypt, Turkey, Greece, and several cruises to the Caribbean, Mexico, and Panama.

Jerry's life was informed by service to others. To name just a few areas, he served as an election judge; he was active through his church in ministries including the Soupmobile, Men of Action Group, was program director for the Wednesday men's breakfast, and was a volunteer prison ministry mentor once a week for 13 years.

Services will be Saturday 4/22/17 at 1:00 pm (with visitation starting at noon) at Center Grove Methodist Church near Gurdon, Ark (where Jerry was baptized) to be followed by burial at Center Ridge Cemetery. A celebration of life is being planned for Memorial Drive United Methodist Church in Houston.
To order memorial trees or send flowers to the family in memory of Jerry Clark, please visit our flower store.