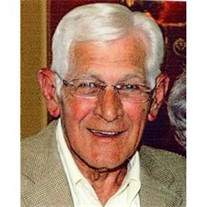 Jeff Caldwell, age 75, of Arkadelphia, passed away Monday, March 14, 2016 in Little Rock. He was born November 24, 1940 in Magnet Cove, Arkansas to the late James L. and Ruth Atkins Caldwell. Jeff was a member of Hollywood United Methodist Church. He was involved in the automobile business for many years, owned and operated Kwik Way Auto Sales in Arkadelphia. He was a member of the United States Croquet Association.

He was preceded in death by one brother, Jimmy Caldwell.

Services will be at 2:00 pm Thursday, March 17th at Ruggles-Wilcox Funeral Home with Rev. Debbie Perry and Rev. Danny Dunlap officiating. Burial will follow at Rest Haven Memorial Gardens. Visitation will be 6-8 pm Wednesday at the funeral home.

Memorials may be made to Hollywood United Methodist Church.
To order memorial trees or send flowers to the family in memory of Jeff Caldwell, please visit our flower store.