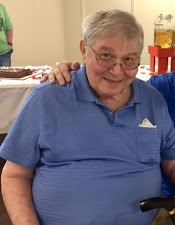 Jim Kilts age 83, of Arkadelphia passed away Friday, June 17, 2022, at his home. He was born March 27, 1939, to James L. and Fern Hansen Kilts. He was raised in the Catholic Church. He always said he felt closer to God when he was on his tractor. Jim loved his God, Country, and his family especially his grandchildren.

Jim served in the U. S. Navy from 1956 until 1962. In the sixties, he participated in short track dirt racing in Southern California. He was a member of the Clark County Cattleman’s Association. He was the owner of Kilts Beefmaster in Okolona.

He retired from UAPB and from Scroll Technologies as an industrial maintenance engineer.

Please join us as we celebrate his life on Thursday, June 23rd with visitation beginning at 1:00 PM with services following at 2:00 PM at Ruggles-Wilcox Funeral Home with Bro Jeffrey Murphy officiating. Services will conclude with military honors.

The family would like to extend their gratitude and thanks to Baptist Health Hospice, Dayna Garrett R. N. and Dr. David Jones and staff.

Memorials may be made to American Heart Association or American Cancer Society.

To order memorial trees or send flowers to the family in memory of James "Jim" Kilts, please visit our flower store.
Send a Sympathy Card