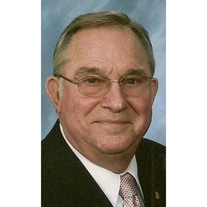 James Alva Hunter, 79, Harrisonville, Missouri, was received by our Lord Jesus Christ on Sunday, January 15, 2017 at his home in Harrisonville. Visitation will be held from 5:00-7:00 p.m. Wednesday, January 18, 2017 at the Atkinson Funeral Home in Harrisonville. A Masonic Service, under the direction of Cass Masonic Lodge #147, will begin after the visitation at 7:00 p.m.&#160; Funeral services will be held 2:00 p.m. Friday, with Rev. Fred W. Hunter officiating with a visitation at 1:00 p.m. Friday, January 20, 2017 at the Ruggles-Wilcox Funeral Home in Arkadelphia, Arkansas. &#160;Burial with military honors will be in Atchley Cemetery, Dalark, Arkansas.

James was born April 20, 1937 in Dalark, Arkansas, the oldest son of Alva High and Ruth Janette (Williams) Hunter.& James grew up and attended schools in Dalark and Sparkman, and joined the Air Force after graduation from high school. He was an Air Traffic Control Specialist in the Air Force and retired from the Air Force at Richards-Gebaur Air Force Base in Belton, MO as a Master Sergeant in 1975.

James was united in marriage to Helga M. Wollenhaupt, Friday, December 13, 1957 in Frankfurt, Germany.After his retirement from the Air Force, they made their home in Harrisonville. After his military retirement, James worked at Howard McHenry Motors in Harrisonville, R.B. Rice in Lee's Summit, MO, drove the Jimmy Dean Show Truck all over the United States, and after driving for FedEx James retired.