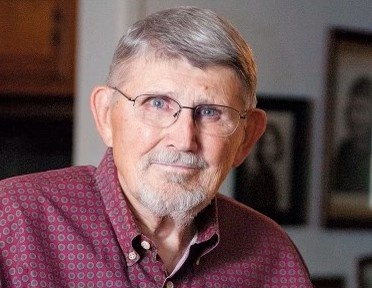 James Patrick Adcock of Arkadelphia passed away Saturday, September 4, 2021. He was born December 27, 1936, in Russellville, Arkansas to the late Everett Benjamin and Mae Renfroe Adcock. Pat is also preceded in death by his wife, Margaret Milloway Adcock.  He is survived by a daughter and son-in-law, Beth and Wayne Neel, a grandson, Luke Neel (Tina), a granddaughter, Elizabeth Berry (Mitchell), a sister, Pam Thomas and three great-grandchildren: Rebecca Neel, EmiLou Neel and Everett Berry all of Arkadelphia. He was a 50-year member of First United Methodist Church in Arkadelphia.

Patrick was a graduate of Central High School where he played junior varsity football and was voted class jester of the Senior Class of 1954. He attended the University of Arkansas at Little Rock and earned his undergraduate degree from the University of Central Arkansas where he served as president of his fraternity (Phi Lambda Chi), participated in intramural sports and campus theater, and met his future wife of fifty years, Margaret Milloway Adcock. He later obtained degrees from University of Arkansas at Fayetteville and Texas A&M University at Commerce. He served in the United States Army, the Arkansas and Missouri National Guards and the Army Reserve. From 1961 to 1968 he was employed by the U. S. Social Security Administration. He later taught English, creative writing and speech for thirty years at Henderson State University where he retired in 1999 as professor emeritus.

He wrote consistently throughout his teaching career, trying his hand at many genres-newspaper features, reference essays, short stories, poetry, plays and even comedy material for Reader’s Digest and comedian Tony Russell. His novel, Muggsbottom and Me was published in 1993.

Pat was a devoted grandfather, never missing school and sports events that his grandchildren participated in. He loved to travel and continued that pleasure until his health no longer permitted it. He never stopped reading extensively and wrote a final play, Gramps in Exile in 2019. He enjoyed weekly lunches with his grandchildren and great-grandchildren until the very end of his life.

A graveside memorial service will be 10:00 AM Monday, September 13th at Center Ridge Cemetery near Gurdon.

Click to download / open
To order memorial trees or send flowers to the family in memory of James Adcock, please visit our flower store.