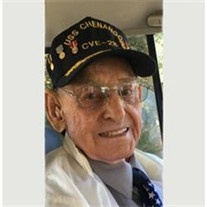 Jacob Beebe Yeager, 90 of Arkadelphia AR, passed Tuesday, January 3rd at Baptist Hospital in Little Rock with his children holding his hands.&#160;
Survivors are Kitty Yeager of the home, one son, Jack B. Yeager of Little Rock, Arkansas; one daughter, Jill Escalante (Steve) of Houston, TX.; one grandson, Nicholas Yeager Elliott (Chantal) of Houston, TX; one granddaughter, Katja Yeager of Cleveland, OH; two step grandchildren, Luke Escalante, of Fayetteville and Ashlyn Escalante of Little Rock; one sister, Patsy Jean Yeager of Rio Linda, CA., and one special grand dog, Sadie Escalante, who loved to sit in his lap.&#160;
He was born December 18, 1926 in Gurdon, Arkansas to Doane Yeager and Marguerite Lipscomb Yeager. He is preceded in death by siblings Doane Yeager Jr., Mary Pennington, and A.D. Yeager.
&#160;
Mr. Yeager, affectionately referred to as "B" to his friends, was a WWII Veteran. He served his country aboard the aircraft carrier Chenango. At 19, he was a decorated three-year hardened combat veteran, having been in almost every major battle in the South Pacific. He received many medals including the Philippine Liberation medal from the President of the Philippines.
He returned from the war and went to work for Arkansas Power and Light, where he retired after 43 years.&#160; He loved roller skating with his wife Kitty, and was recruited to skate professionally by a Chicago skate team. Mr. Yeager coached baseball for two years in the Arkadelphia Junior Deputy League, four years in Little League, and three years in the Babe Ruth League. He coached the 1968 Clark County Babe Ruth team, who went on to win the Arkansas State Championship, the first ever for Clark County.
&#160;
He was an avid golfer who won and placed in many tournaments. He learned to snow ski at age 62. He was terrific at it! But more than anything, he loved his family.
&#160;
There will be a 10:00 - 11:30 visitation followed by a short service, beginning at 11:30 Friday, January 6th &#160;in the Ruggles Wilcox Chapel in Arkadelphia, AR, with Martin Jones officiating.&#160; A private, immediate family only, burial with Military Honors detail will be held at Rest Haven Memorial Gardens.
Sincere thanks to the caregivers and staff at Brookdale Assisted Living in Little Rock, AR, and Baptist Hospital in Little Rock. A very special thank you to Teresa Snook for her love and care with Beebe. Memorials&#160;may be made in his name by the charity of your choosing. Please, no gifts of food to the family.
To order memorial trees or send flowers to the family in memory of Jacob Yeager, please visit our flower store.