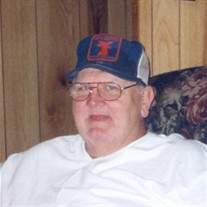 Garland Wright age 73 of Sparkman, passed away on Tuesday April 17, 2018 in Arkadelphia. He was born June 27, 1944, the son of Lute and Johnnie Ozelle Lee Wright in Sparkman, AR. He was a pillar of the Sparkman Community, owning a grocery store and selling Bar-B-Q. He loved his community and helped anyone in need.

Garland is preceded in death by his mother and father and his wife of forty-three years Jeanette. He is survived by one son, Chris Wright of Sparkman; two daughters, Shelley Wright of Fayetteville, AR, and Brandi Cotton and her husband William of Sparkman; one sister Donia Bryant of Camden, AR, and two grandsons Lunden and Tanner Cotton also of Sparkman.

Visitation will be from 5:00 - 7:00 pm Thursday, April 19, in the Ruggles Wilcox Funeral Home Chapel. Services will be 10:00 am Friday, April 20, at the Sparkman United Methodist Church, with Peggy Abbott officiating. Burial will be in the Sparkman Cemetery. Pallbearers are Paul Robbins, Clayton Robbins, David Brazeale, Rob Seale, Donny Denton, Larry Graham, and honorary pallbearer Wayne Wilkins.
Memorials may be made to the Sparkman United Methodist Church.

To order memorial trees or send flowers to the family in memory of Garland Wright, please visit our flower store.