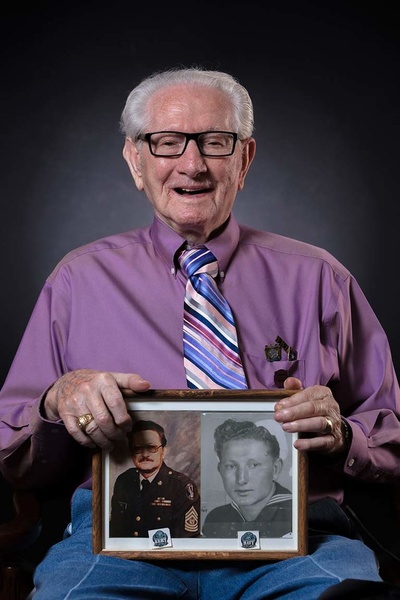 Royal Garl Neel age 96, of Hot Springs formerly of Arkadelphia, died at Encore Nursing Home on Friday, July 29, 2022 in Malvern. Garl was born October 1, 1925 in Arkadelphia to Elbert (Little Buddy) and Mattie Mae Brown Neel. After graduating from Arkadelphia High School in 1943, he enlisted in the U. S. Navy in October of 1943. Garl served on the USS Hansford in the invasion of Iwo Jima. He received numerous medals and ribbons. After his enlistment in the Navy, he served for over twenty-five years in the Army Reserve retiring as Command Seargeant Major.

While he was in Arkadelphia, he served on the City Council, was president of the Arkadelphia Civitan’s Club and the Arkadelphia Jaycees. He was a member of the Arkadelphia First Baptist Church.  He started working in Hot Springs in 1947 at Southwestern Bell as a station installer. N Later he moved to Arkadelphia working as an installer repairman, Central Office Repairman and was promoted to wire Chief. He returned to Hot Springs in 1977 as Chief test Boardman the network services supervisor. After thirty-eight years of service, Garl ended his career with Southwestern Bell Telephone Company distinguished by professional achievement and service. He resided in Country Club Village in Hot Springs for the last several years.

Garl was preceded in death by his parents, his wife of sixty-six years, Hugh Dell Neel; a brother, Herbert Neel and wife, Jessie Mae; a brother, Bill Neel and his wife, Marge; and a son-in-law, Gary Peters.

Visitation will be 1:00 PM Tuesday, August 2nd until service at Ruggles-Wilcox Funeral Home.

The family would like to extend their appreciation and gratitude to Encore Health and Rehabilitation in Malvern for their excellent care.

To order memorial trees or send flowers to the family in memory of Garl Neel, please visit our flower store.
Send a Sympathy Card