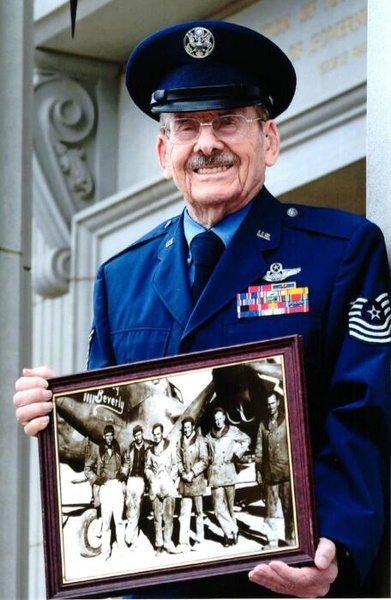 Eugene G. Pillard age 102, of Arkadelphia, passed away Tuesday, July 28, 2020,  in Arkadelphia. Gene was born January 5, 1918,  to the late George Louis and Esther Peterson Pillard.  He was a member of Third Street Baptist Church.

Gene joined the United States Air Force at age 23, serving for 33 years then retiring as a Master Sergeant. He was a crew chief working on P-38 Fighters. He served in the European and African Theatre. Gene purchased a motorcycle in England and transported it to Italy where he enjoyed racing in the airfield. He was a veteran of World War II and served non-combat during the Korean and Vietnam Wars.  After service to his country. he joined the Air/Sea Rescue Reserves serving as freight chief and navigator.

Gene always had a strong belief in giving back to his community. He returned to school in his fifties and received certification to teach automotive engineering and welding. He taught for the Department of Corrections in California and High School in Nebraska. He moved to Arkansas where he brought his mother and father.

Gene was involved with Boy Scouts of America and Future Farmers of America. He delivered Meals on Wheels, prepared taxes for elderly citizens, taught Driver Education courses and taught Flag classes at local elementary schools. He went on several church mission trips including Guatemala and Dominican Republic. Gene served on the local Southern Baptist Disaster Relief team going to New York during 911, Colorado Fires and to New Orleans in the Katrina Relief. He served on the Governor’s Advisory Council on Aging. At Third Street Baptist, he was an AWANA listener for several years.

Gene was a devout Christian. He was an avid gardener and enjoyed raising large gardens.

He is survived by his wife whom he married August 9, 1992, Pat H. Pillard; one son, Eugene G. Pillard II of Kauai, Hawaii; one daughter, Jan Pillard of Hot Springs; two grandsons, James Pillard of Seattle and Alexander Pillard of Concepcion, Chile; several nieces and nephews.

A memorial service will be announced.

In lieu of flowers, memorials may be made to Third Street Baptist Church P. O. Box 763 Arkadelphia, AR. 71923. Online register is available at www.ruggleswilcox.com

To order memorial trees or send flowers to the family in memory of Eugene Pillard, please visit our flower store.