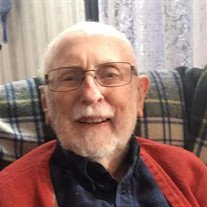 Edward John Goerling age 89, was born May 31, 1929 on the south side of Chicago; he was preceded in death by beloved wife of 53 years Phyllis B Goerling; he is survived by and loving father of Michael (Rita), Catherine Blythe, Philip (Kari), Amy (Matthew) Williamson, Mary (James) Buckner, Thomas (Mary) and Jean (Mark) Johnson. He is also survived by 32 grandchildren, and his nieces and nephew, Betty, Diane, and Arthur.

Edward joined the Navy in 1952 - 1956 as an Electrician Instrument Repairman assigned to the Terrebonne Parish sailing the Caribbean seas.
He married Phyllis Jean Blythe on August 28th 1959 at the St Clemente's Church in Chicago.

They moved to Oak Park, Il and started their family. He was active with the St. Edmond's Parish, the Men's Club and their Boy Scout troop.
Moved to Elmhurst 1978, active with the Immaculate Conception Men's Bowling League. He was instrumental in the delivering of special holiday dinners for Meals on Wheels for many years.

In 1987 They moved to Naperville, IL and was an active member of the Saints Peter and Paul Parish. He enjoyed singing with the Deadbeats choir. He was a semi regular volunteer at the Naper Settlement; dressing as the dapper gentleman counterpart of Phyllis' Victorian lady of style.

Moved to Arkadelphia, AR in 2013 where he lived with his daughter, Mary, learning a more laidback easy going lifestyle. He loved going to the Honey Comb for breakfast and later going to the Arkadelphia Senior Center for lunch. He was briefly a resident at "The Plaza." He was loved by all that met him. He was a true gentleman and will be truly missed.

Memorials may be made to U. S. Navy Menorial at www.navymemorial.org or to Hesed House at www.hesedhouse.org

To order memorial trees or send flowers to the family in memory of Edward Goerling, please visit our flower store.
Send a Sympathy Card