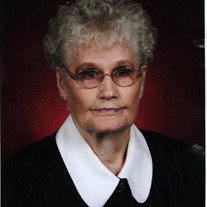 Dorothy Estell Nilz, 92, of Whelen Springs, Arkansas was called home by the Lord on September 25, 2018. She was a dedicated and fierce Christian, who instilled the love of the Lord in her family.

Dorothy was born February 19, 1926 to John Garland and Nellie Mae (Hampton) Turnipseed of Fort Smith, Arkansas. Dorothy was preceded in death by both of her parents; her husband, A. J. Nilz; three daughters: an infant Nilz, Judy (Nilz) Hathcoat, Donna (Brown) Hill; her brother, Bob Turnipseed; and grandson-in-law Kelly Whisenhunt.

She is survived by three daughters: Sandra (Richard) Roberson and Debbie (Ronnie) McBride of Gurdon, AR, and Nikki (Robert) Schee of Whelen Springs, AR; a son, John (Sandy) Nilz of Greenbrier, AR. She is also survived by two siblings: Jean Ingram of Broken Arrow, OK and C. B. (Billie) Turnipseed of Fort Smith, AR. Dorothy leaves behind a host of nieces and nephews, grandchildren, great-grandchildren, and great-great-grandchildren.

Dorothy grew up in Fort Smith, AR during the 30's and 40's. Her father worked for the local smelting company and her mother was a homemaker. Dorothy followed in her mother's footsteps, marrying A.J. Nilz in 1949, whom she had met while he was stationed at Fort Chaffee Airbase following WWII. After marrying, she and her husband relocated to the Arkadelphia area, where he worked for Reynolds Aluminum. Together they raised a family on a shoestring budget. Money was tight but she always managed to make things work by milking cows, gardening, canning, sewing, crafting, and quilting. These skills were learned through the Extension Homemakers Club.

For many years she was a member of Harmony Hill Baptist Church where she would attend dinner on the ground with her famous fried chicken and also homemade ice cream socials with her family. In her later years she enjoyed spending time with her family, especially during the holidays when she could spoil everyone. In recent years, Dorothy attended Bethlehem Baptist Church in Whelen Springs. She will be dearly missed by all her
family and friends.

Visitation will be held from 6:00 to 8:00 pm Friday, September 28th at Ruggles-Wilcox Funeral Home in Arkadelphia.

A celebration of life will be held at 3 pm Saturday, September 29th at the funeral home with Bro. Daniel Schee officiating. Interment will be at Rest Haven Memorial Gardens.

In lieu of flowers, please make donations to Team Rubicon, a disaster relief organization at https://teamrubiconusa.org/give /

To order memorial trees or send flowers to the family in memory of Dorothy Nilz, please visit our flower store.
Send a Sympathy Card