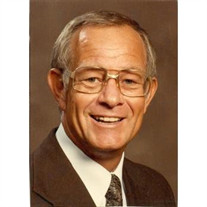 Donald R. Dodson, age 83 of Arkadelphia, died Thursday, September 8, 2016. Born December 14, 1932 in Macedonia, AR, a rural community in Columbia County, the son of Edward and Maude Jessie Smith Dodson. Don enjoyed fishing, tennis, bridge, dominoes, traveling, horse racing, football, casinos, but most of all, time with his family. He served in the U.S. Army stationed in Yokohama, Japan during the Korean War. Don received a Masters in Business Education from the University of Arkansas in 1957, received MBA in Accounting from Texas A&M, and received Ford Foundation Award from the University of Indiana. Don taught Accounting at Henderson for 40 years (1957-1997), retired Associate Professor Emeritus of Accounting and was awarded the "H" Award for meritorious service to Henderson. He passed the CPA exam in 1971. Don and wife Lois had a tax service in Arkadelphia for over 50 years. Don's mother was a great inspiration for her children's education. As the baby of eleven children, she taught him how to cook for the family in the fields hoeing and picking cotton. "Mom and I would finish up cooking three meals a day, making cakes in Crisco cans, cleaning up, washing clothes, and then we hit the fields too." She was a gracious lady and loved all her family. Don's family would like to thank the administration, kitchen staff, CNA's and nurses at Fox Ridge Assisted Living NLR for making him feel at home. We would additionally like to thank the staff of Hospice Home Care. He was preceded in death by his wife, Lois Clinton Dodson, son Don Alan Dodson, six sisters and four brothers, Pauline (Ervin) McWilliams, Lucille (Archie) Kirkpatrick, Jim (Ruth) Dodson, Sam (Leola) Dodson, Bob (Anita) Dodson, Clifton (Margie) Dodson, Louise (Alvin) Roberts, Winnie (Verlis) Rose, Hazel (Charles) Conway and Patricia (Tommy) Welch.