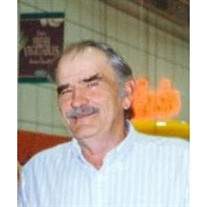 Donald Calvin Deckard, age 78, of Donaldson, died Tuesday April 19, 2016. He was born November 30, 1937, in the DeRoche Community, the son of Earnest and Pearl Burnett Cypert Deckard. He was a brick mason, and an U. S. Army Veteran. He was preceded in death by his parents, a step-father, Carl Cypert; a daughter Karen Deckard, and a brother Dr. Clyde Ray Smith.

Funeral service will be held 11 AM Saturday, April 23rd. in the Ruggles-Wilcox Chapel. Burial will be in the Havana Cemetery, Havana Arkansas. Visitation will be 6-8 PM Friday at the funeral home. Pallbearers will be Brach, Justin, and Colton Williams, Dylan Deckard, Jeremy Selvira,and Kenny Callison. Honorary pallbearer will by Hunter Deckard.
To order memorial trees or send flowers to the family in memory of Donald Deckard, please visit our flower store.