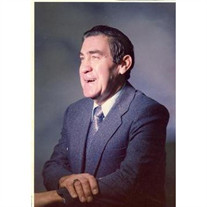 Charles Bennett Walker, age 83, of Arkadelphia, left this world on Wednesday, February 17, 2016 and entered the presence of his Lord and Savior, Jesus Christ.

He was born and raised in Arkadelphia by his parents, the late Henry Grady and Eula Bennett Walker.

He was preceded in death by his parents; one brother, Grady Walker; sister, Rebecca Poindexter; wife, Margaret Walker; wife, Inez Walker; one son, Mitchell Walker; and one daughter, Paulette Walker.

His life will be celebrated at 2 p.m. Saturday, February 20th, 2016 at Ruggles-Wilcox Funeral Home Chapel with Pastor Temon Jenkins officiating. Burial will be in the Macedonia Cemetery. Visitation is scheduled for Saturday, February 20th from 1-2 p.m.
To order memorial trees or send flowers to the family in memory of Charles Walker, please visit our flower store.