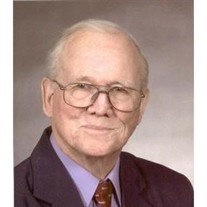 Charles Derwood Phillips Jr. went to his Eternal home on Saturday, September 10 2016. He was born in Ferriday, LA May 9, 1925. He was preceded in death by his parents, 2 sisters, and a nephew.

After graduating high school at Ferriday, LA, Charles enlisted in the Air Force where he attained the rank of Sergeant before being discharged at the end of the war. He attended LSU where he earned Bachelors and Masters Degree in education. While at LSU he was on the weight lifting team where he helped lead them to back to back National Championships in 1947 and 1948. He lifted weights until six months prior to his death. In May of 1957 he was called to Christian Education and attended seminary in New Orleans. He served churches in Port Allen, LA, Miami, FL and Mobile, AL. After earning a PhD in Education, he taught at Nicholls State University in Thibodaux, LA.
Upon early retirement he moved to Arkadelphia where his 40 plus years were spent in service to the Lord and community. His major area of service was Gideons International. He held most local offices and served on the State Cabinet. Kairos (prison ministry) claimed a great part of his heart and time, serving the Pine Bluff and Malvern units. His opportunity to teach English as a second language in the Peoples Republic of China for 5 years was the apex of his retirement. Charles also served with Red River Disaster Relief. He had the opportunity to spend one week at ground zero after 9-11. Even in death he continued the spirit of giving by allowing his body to be donated to medical science.

The celebration of Charles' life will be 4 PM Tuesday September 13th at First Baptist Church Arkadelphia, Dr. Lee McGlone officiating, with a reception to follow in the fellowship hall. In lieu of flowers, donations may be made to Gideon's International or First Baptist Church of Arkadelphia.
To order memorial trees or send flowers to the family in memory of Charles Phillips Jr, please visit our flower store.