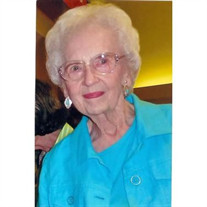 She was born Aug. 21, 1925, to Bess Rex Caskey and W.J. Caskey in Des Arc. Her father owned the hardware store and funeral home on Main Street in Des Arc. He also was a county elected official, and Carolyn loved traveling around Prairie County with him. She was a proud daughter of the Grand Prairie, soaking up the traditions and culture of the lower White River region in her travels with her father. She excelled in school and was active in the First Baptist Church of Des Arc, which was just down the street from her family home on Erwin Street. Carolyn spoke at her high school graduation on May 27, 1943, as her three older brothers were out of the country fighting in World War II. She told those gathered: "No one contends that ours is a perfect democracy. In the years that follow this war, it must be made nearer to perfection."

She entered what's now Ouachita Baptist University at Arkadelphia as a freshman in the fall of 1943. After the war ended, she met Robert L. "Red" Nelson of Benton, who was returning to Ouachita following service in the U.S. Army Air Forces as a bombardier on a B-17. Red was a sports star at Ouachita, excelling in football, basketball and baseball. Carolyn, meanwhile, was named Ouachitonian Beauty. Carolyn and Red married on Aug. 11, 1946, at the Caskey family home in Des Arc. Carolyn graduated from college in the spring of 1947 and worked as an assistant to an Arkadelphia businessman while Red quarterbacked the Ouachita football team in the fall of 1947 and then graduated in the spring of 1948.

Following Red's graduation from college, he was offered the job of head football coach at Newport High School. He accepted the offer and the couple moved to Newport, where Carolyn taught elementary school. The couple's daughter, Lynda, was born at Newport. Red and Carolyn made lifelong friends during their years in Newport, remaining in contact with them through the decades. After three years at Newport, Red joined his older brother, Lowell, in business at Arkadelphia. The Nelson brothers built Southwest Sporting Goods Co. into one of the region's largest providers of athletic supplies to high school and college teams, and Carolyn served for many years as the company's business manager.

Red spent days at a time on the road calling on high school and college coaches. Carolyn remained behind in Arkadelphia to help run the business and raise her family. Son Bob was born in 1954 and Rex was born in 1959. Bob was killed in a tragic accident at Pine Bluff while the family was attending a college basketball game in February 1964, but Carolyn persevered, providing for Lynda and Rex while helping oversee the growth of Southwest Sporting Goods. She was active in the First Baptist Church of Arkadelphia and a member of the PEO. She could be found each Sunday morning with Red in their usual seats in the balcony of First Baptist Church. Red and Carolyn celebrated their 64th anniversary on Aug. 11, 2010. Red died at age 86 in March 2011.

Carolyn will be remembered by her many friends for her graciousness. She was the epitome of a Southern lady.

In addition to Red and Bob, Carolyn was preceded in death by her parents; by brothers Bill and Joe; and by a sister, Bess.

Following a private family burial, a memorial service and celebration of Thanksgiving will be held at 11 a.m. on Wednesday, Nov. 25, at the First Baptist Church of Arkadelphia with arrangements handled by Ruggles-Wilcox Funeral Home. There will be no formal visitation. In lieu of flowers, the family requests that memorials be made to the Ouachita Tiger Gridiron Club, Ouachita Baptist University, 410 Ouachita St., Arkadelphia, Ark., 71998. Red was a founder of the club, and Carolyn rarely missed a home game since the stadium was only a block from the family home. The family would like to thank the staff of Parkway Village for the care they provided Red and Carolyn after they moved there from Arkadelphia. Sign on line guest book at www.ruggleswilcox.com .
To order memorial trees or send flowers to the family in memory of Carolyn Nelson, please visit our flower store.
Send a Sympathy Card