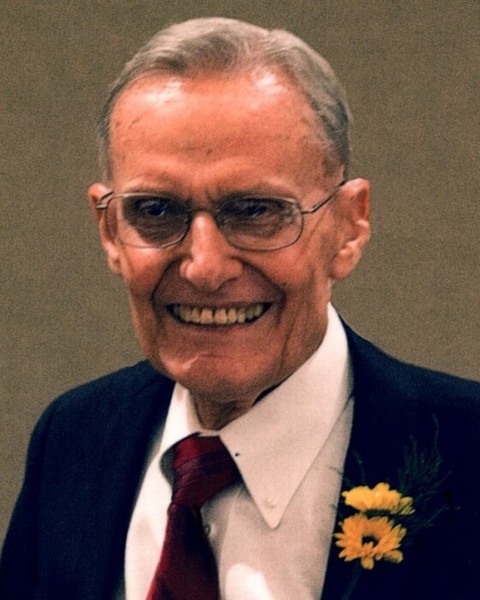 Carl Wesley Kluck, Sr., was born November 28, 1923 in Marlin, Texas of Falls County to Charlie William and Marie Alfreida Wolff Kluck.  He was preceded in birth by sister Ruth Evelyn and followed in birth by Homer Roy and Lois Marie.  Until May 1944 Carl stayed home to help the war effort on the family farm.  After enlisting, he served with the 4th Infantry Division in the European Theatre of Operations during World War II until May 1946.  After his discharge, Carl enrolled in Texas Wesleyan College, Fort Worth, Texas.  It was at TWC that he met Margie Ruth Sandridge, the love of his life.  Margie first saw Carl with his brother Homer in the college cafeteria.  She asked a friend who he was and was told he was one of the two brothers that sang.  It did not take long for romance to develop, because Carl and Margie were married August 25, 1947.

Upon receiving his accounting degree, he worked at Millers Mutual Fire Insurance Co.  In April 1953 Carl answered the call to full time church ministry and began his studies at Southwestern Baptist Theological Seminary.  By the time he graduated in 1956, both children Sharon Dianne (1951) and Carl Wesley, Jr. (1955) had been born; he had had two part time pastorates at Hood and at Rosston, Texan; and had worked in various other capacities to earn a living.  The First Baptist Church of Atkins, Arkansas was Carl’s first full time pastorate.  It was there that he and Margie learned to love and work together with people of all backgrounds.  Also, while living in Atkins, they lost a child through miscarriage in 1957.

Feeling the Lord’s leading, the Kluck family moved from Atkins in 1960 to Arkadelphia, Arkansas where Carl accepted the pastorate at Second Baptist Church.  The years in Arkadelphia were full.  Second Baptist presented a great opportunity of ministry to the community and to college students from both Ouachita and Henderson.  Carl completed his master’s degree from Ouachita Baptist during this time.  On December 31, 1990 Carl retired from Second Baptist after 30 years.

Retirement provided other opportunities.  For twenty-five years he maintained the yard and did janitorial work at his son Wesley’s medical building.  He was a long time interim at Mt. Bethel Baptist Church.  He also enjoyed carpentry and did many projects in the backyard shed that was built by the good people of Second Baptist.  Carl took great pleasure in his children, grandchildren, and great grandchildren.  He was the family patriarch who prayed and loved and guided the next three generations toward the Lord.  Carl Kluck lived the motto of loving and serving the Lord with integrity.

Due to COVID mandates, face coverings and social distancing will be required.

To send sympathy gifts to the family or plant a tree in memory of Carl Wesley Kluck, please visit our tribute store.

Click to download / open
To order memorial trees or send flowers to the family in memory of Carl Kluck, please visit our flower store.
Send a Sympathy Card