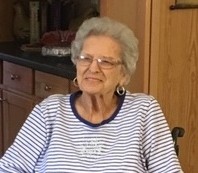 Bonnie Jean Morrison Wells of Gurdon, age 86, passed away April 13, 2020. Bonnie was born September 13, 1933 to the late Clayton and Aldena Morrison. She was the oldest of 13 children. She was a charter member of the Center Point Baptist Church. She worked many years in different sewing factories; Oberman’s, Levi Strauss and Vasserette. She and her husband owned and operated a little country grocery store for many years.

Family and friends are welcome to come pay their respects Wednesday, April 15, 2020 from 10 a.m. – 6:00 p.m. at Ruggles-Wilcox Funeral Home. A private family service will be conducted on Thursday, April 16, 2020, the service can be viewed live streamed at 1:00 p.m. on the Ruggles-Wilcox Facebook page. Burial will be in South Fork Cemetery.

To order memorial trees or send flowers to the family in memory of Bonnie Wells, please visit our flower store.
Send a Sympathy Card