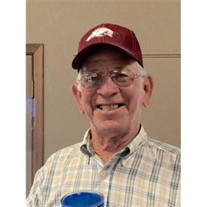 Bobby Joe Pritchard, age 80, of Gurdon, passed away Monday, January 18, 2016. He was born May 19, 1935, one of ten children to the late Raymond B. and Dorothy M. White Pritchard. He attended Third Street Baptist Church in Arkadelphia.

Bobby was involved in the grocery and restaurant business and was very active in the community. He served as a city board member, a member of the Rotary Club, president of the Booster Club and coached in the Boys and Girls City League.

He was preceded in death by one brother, Raymond "Buddy" Pritchard Jr. and one sister, June Lewis.

Services will be 1:00 p.m. Friday, January 22nd at Third Street Baptist Church in Arkadelphia with Greg Latham officiating. Interment will be in Rest Haven Memorial Gardens, Visitation will be 6-8 pm Thursday at Ruggles-Wilcox funeral home.

Memorials may be made to Scott Plantation P. O. Box 214 Scott, AR. 72142.
To order memorial trees or send flowers to the family in memory of Bobby Pritchard, please visit our flower store.
Send a Sympathy Card