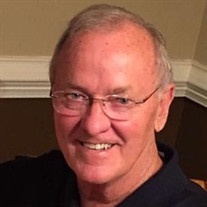 Bob "Sody" Arnold (born Robert Clark Arnold), 74, left his Hot Springs home, surrounded by family, and walked into the arms of his Savior on Friday, October 27, 2017. He left this Earth satisfied with a life well lived, having first gifted his family a legacy of unconditional love and service.

Born on October 6, 1943, to R. Myron Arnold and Glena Deaton Arnold in Camden, Arkansas, Sody is now reunited with his parents and his big sister (and best friend), Carolyn Arnold Batson, in Heaven. He leaves behind his wife, Laurie Nelson Arnold, his son, Dr. Jay Arnold (Jessica) of Hot Springs, his daughters, JaNan Arnold Davis of Maumelle, and Jill Arnold Fletcher of Cabot, his treasured grandchildren, Elizabeth, Emme, Ella Fu, Alli, and Tyce, and dozens of nieces, nephews, cousins and friends whom he considered family. Sody was always the family historian, the center of happiness, and the unwavering protector of his family. He was a "fixer" of all things broken, an artist of many mediums, and he loved having a "project" on which to work. He directed that his obituary should celebrate the fact that our family "always had the best time."

Nicknamed "Sody Pop" because of his family's long affiliation with the soft drink bottling industry, Sody's personality was as bubbly and refreshing as the soft drinks he bottled at the Arkadelphia Beverage Company.

Sody grew up in Arkadelphia and, in his youth, he was particularly active in baseball and football. He was a proud member of the 195¬¬¬6 State Champion Little League Baseball team. He was an Eagle Scout and deeply internalized the Boy Scout principle of serving others, which he followed throughout his life. He graduated from Henderson State Teacher's College where he was a member of Theta Xi Fraternity; a member of the football team; and participated in ROTC, where he was recognized as an excellent Marksman. Although his dream was to be a pilot in the Air Force, he sacrificed that dream for the good of his family when it was necessary for him to step in and help with the family bottling business.

Sody Arnold never met a stranger. In 1976, in his first political campaign, he unseated an incumbent and was elected to the Arkansas House of Representatives. He served Clark County in the legislature into the 1990's and was the longest serving member of the House of Representatives from Clark County. He was trusted and appreciated by all of his colleagues and was never confined by partisan politics. He loved the State of Arkansas and was humbled to be a part of state government and a friend of so many notable men and women with whom he served. He always used his business associations and his position in the Arkansas Legislature to help anyone he could, without regard to who they were or where they were from. He believed in people and could see potential in each person. In addition, he was active in supporting many charities including the Arkansas March of Dimes, Easter Seals, the Arkansas Lung Association, Wildwood Center for the Performing Arts, the Arkansas Cancer Society, and the Hot Springs Humane Society.

Arrangements are being handled by Ruggles Wilcox Funeral Home in Arkadelphia, Arkansas. Visitation with the family will be held on Wednesday, November 1, 2017 from 6 to 8 p.m. A funeral service celebrating Sody's life and legacy will be held the following day, Thursday, November 2, 2017 at 11:00 a.m. In lieu of flowers, the family requests that you make a donation to the charity of your choice.

To order memorial trees or send flowers to the family in memory of Bob Arnold, please visit our flower store.