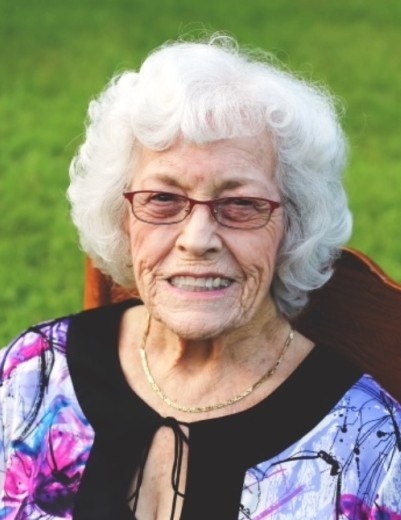 Betty Helms Freeman, 89, of Arkadelphia, AR, went home to be with her Lord and Savior on Thursday, December 20th, 2018. She was born at home to Frank Edgar and Carrie May Eaves Armstrong on March 15, 1929, in Arkadelphia, where she also spent her youth and found the love of her life, William Claxton “Bill” Helms. They wed on Christmas Eve of 1947 and spent close to 50 years together. They had their first son, Pat, in 1949. They lived in numerous places going wherever Bill’s job as a lineman took them. They had their second son, Barry, in 1958 before moving back to Arkadelphia.

She retired as the Lunchroom Manager at Perritt Primary School in Arkadelphia after 30 years of service. She loved her job and understood that the meals she prepared for children might be the only meal some of the children would get to eat that day, so she wanted to make sure it was something delicious and made with love.

After Bill’s life was cut short, Betty discovered love again and married her second husband, Austin Floyd Freeman, in 1997. They spent 19 years together before he passed in 2015.

She was a devoted Christian and virtually a lifelong member of Baring Cross Missionary Baptist Church. She believed strongly in supporting her church even when she was not able to go for services. Strong in her faith, she was always found reading her bible and watching sermons on TV, and listening to gospel and Christian music. She loved cooking for family and friends. She enjoyed sports and the outdoors, which included watching baseball, especially the St. Louis Cardinals and Atlanta Braves, watching Razorback football, traveling the world, camping at the lake, and spending time with her family. Some of her happiest moments were spent with her children, grandchildren, and great-grandchildren, whom she also loved to spoil. Her age didn’t slow her down. She was always active in her children and grandchildren’s lives. She loved everyone and was always reaching out to help any in need.

She was preceded in death by her parents, her first husband William C. “Bill” Helms, her second husband Austin Freeman, both brothers, Thomas Franklin Armstrong and James Edwin Armstrong, and a grandson Matthew Benjamin Helms.

A special thank you to Linda Smith, Donna Martin, and Hospice Homecare of Hot Springs for the care they provided for Betty during her courageous battle with cancer

In addition to flowers, memorials can be made to the American Lung Association at www.lung.org and Baring Cross Missionary Baptist Church at 1511 Walnut Street, Arkadelphia, AR 71923.

To order memorial trees or send flowers to the family in memory of Betty Freeman, please visit our flower store.