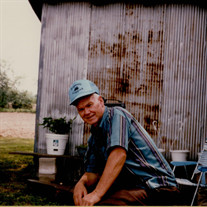 Aubrey Moore was born a farmer and as a young man worked the family farm until called to service during the Second World War, where he served in the United States Navy. During his service he saw duty in the Asian-Pacific Theater, assigned to the Navy's Amphibious Forces aboard the USS LST 221. He was awarded the World War II Victory Medal, the American Campaign Medal and the Asian Pacific Campaign Medal while on active duty. Following his enlistment, he returned to Corning and the life of farming that he knew and enjoyed all too well.

In 1951, he married Alma Jean Kirby and together they would spend the next 60 years until her death in 2011. During that time they relocated and made Arkadelphia their home. Aubrey and Alma operated Moore's Produce Stand in the Joan Community and Gurdon area for a number of years following their retirement. It was through the operation of that roadside stand that their love and compassion for helping others revealed itself as they exemplified the "cheerful giver" who consistently and without condition provided produce at no charge to those who simply could not pay. Aubrey was a Christian of Baptist denomination. He was a quiet, caring man, who epitomized the perception of "country" and possessed a love for country music, especially when sung by his brother, Delmer, Aubrey was a gentle soul who will be missed by family and all who knew him.

Service will be at 2:00 PM Friday, March 2nd at Ruggles-Wilcox Funeral Home with Bro. Ellis Jones officiating. Burial will be in Rest Haven Memorial Gardens. Visitation will be 6-8 PM Thursday at the funeral home.

To order memorial trees or send flowers to the family in memory of Aubrey Moore, please visit our flower store.
Send a Sympathy Card