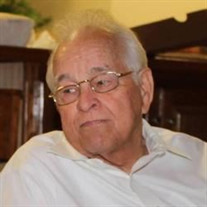 He is preceded in death by: his parents, Oatsie and Hattie Roberts Wilson, one sister Eva Nell Richardson, one infant sister Daisy Wilson, and two brothers, A J Wilson and Jimmy Dean Wilson.

Lincoln was a graduate of Amity High School. He began his business career in banking at Merchants & Planters Bank in Arkadelphia where he worked for twelve years after attending Bryan's Business College in Hot Springs. He later ran for Clark County Treasurer and held the office for sixteen years.

He was active in the community as the secretary-treasurer of the Clark County Fair Association for several years.

For many years, Lincoln was a member of The Country Boys Band and later the Ham N Jam Band, singing lead and backup vocals, playing snare drum and tambourine at various local venues in the Arkadelphia, Benton, and Malvern areas.

Funeral services will be Wednesday, September 7, 2016 at 1:00 p.m. in the Ruggles-Wilcox Chapel. Interment will be at Jones Cemetery in Amity.

Memorials may be made to: Jones Cemetery, % Dora Lee Bean 316 N. Hill St. Amity Arkansas 71921.
To order memorial trees or send flowers to the family in memory of Abe Wilson, please visit our flower store.
Send a Sympathy Card